The Kettle & The Brain 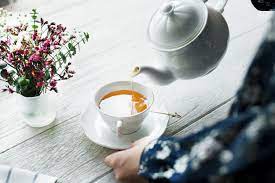 “If you are cold, tea will warm you;

If you are too heated, it will cool you;

If you are depressed, it will cheer you;

If you are excited, it will calm you”

Well by now you all must have guessed that today’s blog post is about TEA.

The beauty of tea was not experienced by me until I entered my 30s. It was then my never ending love for tea blossomed.

Tea not only tastes good but is a good way to nourish our brain. Tea has been used from ancient times to treat cold, flu, and stomach problems. But now studies have been conducted to scientifically study the benefits of tea. The right tea with the right quantity can stimulate, relax, improve focus and give an energy boost to your brain. A study in 2019 found that drinking tea regularly has a protective effect against age-related decline in brain organization.

Tea has caffeine and L-theanine that increases alertness and focus of the brain. Caffeine effects are immediate, it increases focus, alertness and wakefulness. But it’s a stimulant whose effect subsides quickly. Whereas the amino acid L-theanine has a calming effect, it calms you without causing drowsiness. This combination naturally occurs in the tea. Which makes tea the perfect choice when we need to concentrate and focus. Studies have found that this combination of caffeine and L-theanine helps improve mental fatigue, increase reaction time and working memory.

Rosemary: Rosemary is a herb, which is cherished for its aroma and health benefits. The studies on rosemary tea are lacking. But studies have shown that drinking and inhaling compounds found in rosemary improves mood and memory. A study found that the aroma of rosemary improves cognition. Another study found that it significantly lowered anxiety, improved memory quality and sleep. Carnosic acid, an antioxidant also found in the rosemary, has shown promising effects on Alzheimer’s disease and Parkinson’s Disease.

Peppermint Tea: With its beautiful aroma and delicious taste, peppermint tea is found to be beneficial in combating stress and improving long term memory. Research done in Northumbria University found that those who drink peppermint mint tea had better long term memory. Other herbs that were found to have a positive effect on mental performance included sage, lemon balm and ginkgo biloba.

Green Tea: Green tea is considered as one of the healthiest teas due to its benefits. Green tea contains a number of antioxidants namely catechin and flavonoids which have a positive impact on learning and memory. It has a great combo of caffeine and L-theanine making it a favorable drink for boosting brain alertness. It helps in reducing anxiety, improves working memory and attention.

Turmeric Tea: Like ginger, turmeric is also quite a potent spice that is used not only for infusing the food with taste but also for its medicinal benefits. With its anti-inflammatory properties it can be helpful in treating metabolic syndrome, arthritis, muscle soreness, anxiety and hyperlipidemia. Turmeric tea also helps in improving memory and cognitive function and is also touted as a helpful component in treating Alzheimer’s Disease.

So do yourself a favor, pick up that kettle and make yourself a fresh brewed cup of tea. Reap the soothing benefits and enjoy it guilt-free.

Medical Disclaimer: Consult with your doctor before making changes to your diet.